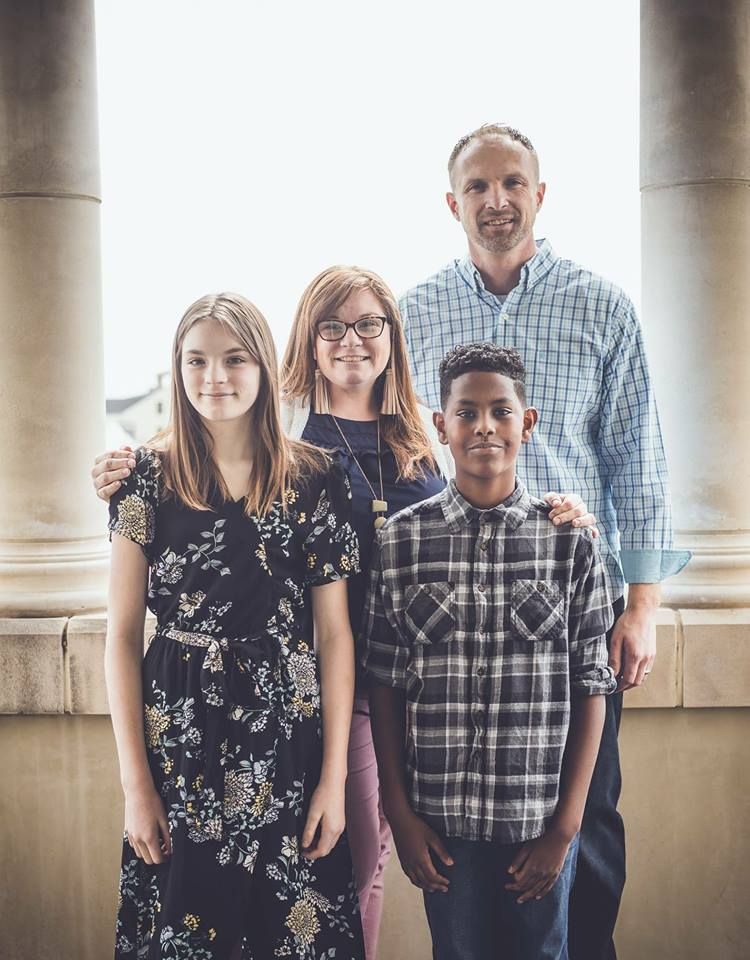 Before I had a relationship with Christ I went to church on occasion with my mom but found church to be a strange experience. I believed in God and prayed to Him but didn't understand why I needed Jesus. I was a very rebellious teenager and self identified with the biker gang life style. When I was 16 years old a group of ex-hells angels came to my school and discussed with us why they left the group and how they came to Christ.

This email address is being protected from spambots. You need JavaScript enabled to view it.

Testimony - Cont.
They invited all of us to an old theater down town and my brother and I went. That night they explained the saving grace of Jesus and putting your faith in Christ alone. My brother and I accepted Christ that night! It was almost magical when I went down and accepted Christ and an experience I will never forget. It wasn't until I was in the military at the age of 24 that I agreed to be baptized. My wife and I decided to raise our children in church and found a healthy church to attend. At first church was still weird, however over time God grew me. I had always wanted to be successful and over the course of a 13 year career I climbed the corporate ladder to the top. What I found was that a big house and all the toys did not bring lasting joy, only serving God full-time for me was what brought lasting joy. My wife and I decided for me to leave my career, sell everything we had, and move to St. Charles, MO to start True Life Community Church. Starting a church is the hardest thing that I have done, but the most rewarding at the same time.

Eric graduated from Missouri Baptist University in 2014 with a B.A. in Christian Ministry, minor in Biblical Studies with an emphasis in Youth Ministry. He is currently pursuing his MDiv through The Southern Baptist Theological Seminary concentrating in Discipleship and Family Ministry. He is set to graduate Spring of 2021. He and his wife, Taylor, have been married since 2014 and have a son named, Wyatt.  Eric enjoys coffee, a good book, a good rain storm, and time spent among family and friends.

Eric was raised in a Christian home. From the time of his birth until now, he cannot remember a time when was not actively attending a church. When Eric was eight or nine, his pastor preached a sermon on hell teaching that it was a place of punishment for those who had not confessed Jesus as Savior and Lord. Eric came home and was scared that this might be where he would end up if he did not confess his sins and believe in Christ. He approached his mom who then asked if he understood that he was a sinner and needed Jesus to die from his sins. Eric confessed these truths and his mom prayed with him and led him to “accept Jesus into his heart.”  He would be baptized in eighth grade after a conversation with his youth leader about the importance of being baptized.

While he showed all the outward signs of a “Christian” (He was a good kid, he showed up to church, he was involved in youth group, he said the right things), his heart was often distant from God during his teen years and he found himself often relying on his own strength to “maintain” his relationship with God. During his Senior year of high school, he began to truly understand the depth of his sin and that no matter what he did, he would never be able to earn God’s love. After this, he started to see more evidence that he loved Jesus, wanted to read God’s Word, and sought ways to bring Him honor and glory. He would be re-baptized his sophomore year in college as a public confession of his new life in Christ.

Contact Information: This email address is being protected from spambots. You need JavaScript enabled to view it.

About the Scriptures: We believe the entire Bible is the inspired Word of God and that men were moved by the Spirit of God to write the very words of Scripture. Therefore, we believe the Bible is without error.

About God: We believe in one God who exists in three distinct persons: Father, Son, and Holy Spirit. We believe that Jesus Christ is the second member of the Trinity (the Son of God) who became flesh to reveal God to humanity and to become the Savior of the lost world.

About Humanity: We believe that all people were created in the image of God to have fellowship with him but became alienated in that relationship through sinful disobedience. As a result, people are incapable of regaining a right relationship with God through their own efforts.

About Salvation: We believe that the blood of Jesus Christ, shed on the cross, provides the sole basis for the forgiveness of sin. Therefore, God freely offers salvation to those who place their faith in the death and resurrection of Christ as sufficient payment for their sin.

About the Christian Life: We believe all Christians will be satisfied by living for Christ and not for themselves and thriving to be obedient to the Word of God and daily yielding to the Spirit of God.

About the Church: We believe that the church is the body of Christ, of which Jesus Christ is the head. The members of the church are those who have trusted by faith in the finished work of Christ. The purpose of the church is to glorify God by loving him and by making him known to the lost world.

How to Know God

WHAT'S THE TRUE MEANING OF LIFE?

We were created to enjoy a personal relationship with God.

People have a natural desire to be the boss and to ignore God's principles for living. The Bible calls this attitude: sin. Sin breaks our relationship with God.

For all have sinned and fall short of the glory of God. Romans 3:23

When our relationship with God is not right, it causes us to not have the true life that God intends for us.

God Himself came to earth as a human being to bring us back to Himself. If any other way would have worked, Jesus Christ would not have had to come.

Jesus said to him, “I am the way, and the truth, and the life. No one comes to the Father except through me.” John 14:6

JESUS HAS ALREADY TAKEN CARE OF YOUR SIN PROBLEM!

For the wages of sin is death, but the free gift of God is eternal life in Christ Jesus our Lord. Romans 6:23

If you declare with your mouth, “Jesus is Lord,” and believe in your heart that God raised him from the dead, you will be saved. Romans 10:9

WHAT DOES GOD WANT YOU TO DO?

Admit that God has not been first place in your life and ask Him to forgive your sins.

If we confess our sins, he is faithful and just to forgive us our sins and to cleanse us from all unrighteousness. 1 John 1:9

Believe that Jesus died to pay for your sins and that he rose again, and is alive today.
If you confess with your mouth that Jesus is Lord and believe in your heart that God raised him from the dead, you will be saved. Romans 10:9

Accept God's free gift of salvation. Don't try to earn it.
For by grace you have been saved through faith. And this is not your own doing; it is the gift of God, not a result of works, so that no one may boast. Ephesians 2:8-9

Invite Jesus Christ to come into your life and be the director "Lord" of your life.
But to all who did receive him, who believed in his name, he gave the right to become children of God, who were born, not of blood nor of the will of the flesh nor of the will of man, but of God. John 1:12-13

You can do this by praying a simple Prayer of Commitment to God:
"Dear Jesus, thank you for making me and loving me, even when I've ignored you and gone my own way. I realize I need you in my life and I'm sorry for my sins. I ask you to forgive me. Thank you for dying on the cross for me. Please help me to understand it more. As much as I know how, I want to follow you from now on. Please come into my life and make me a new person inside. I accept your gift of salvation. Please help me to grow now as a Christian."

For “Everyone who calls on the name of the Lord will be saved.”  Romans 10:13

Please contact us so we can send you some free information on a life with Christ.